Enrichmentality is dedicated to enriching life by exploring the ways we talk and think about money. If you're new to the site, check out this series introducing the language of money.

Copy and paste the below to your favourite social media

Look up the words ‘finance’ and ‘women’ on a bookselling site like Amazon (not that I’d recommend you buy anything from them) and you’ll find over ten thousand books.

Switch out ‘women’ for ‘men’, and you’ll find half as many. And most of these simply mention the word ‘man’ or ‘men’ in their titles in a generic sense. They’re referring to the whole human race rather than men specifically. Others, such the troubling Act Like a Lady, Think Like a Man are actually aimed at women (and not really about finance at all).

But do we even need separate books on finance for women and men? And why are there so many more books aimed at women?

Generally, I find books on topics such as economics aimed at women tend to suffer two problems:

This is a pity, because, in my view, many of these resources are simply (intentionally) mislabeled. They’re actually beginners’ resources that, for marketing purposes, are called women’s guides. And had Barbie pink covers slapped on them. And this leads to two related problems:

Tracey Edwards’ $0 to Rich was the first financial book aimed at a female audience I read. Although the title is not overtly gendered, the cover was bright pink and depicted an impossibly thin female sillhouette carrying stacks of shopping bags (rather the opposite message to the book itself).
Surprisingly, I found the book to be an excellent guide to basic finances. It covers creating a budget, savings goals, investing, and keeping your money safe. I’d recommend it highly to anyone – male or female – unafraid of having their eyesight damaged by the horrifically bright pink cover.
Check out the website http://www.0torich.com/ for free tips.

first, for a basic introduction to finances.
Check out  http://shoppingforshares.com/ for free tips.

Flirting Finance represents a rather different example of the same genre.
The title appears to take inspiration from Mills and Boon. Although it leaves the reader’s eyes unassaulted by any overly-bright pink hues, going for a more sedate white background, we again see the appearance of an implausibly thin woman in a short skirt and low-cut top. However, this woman, on the phone, with a stock chart in the background, seemed engaged in a relevant activity. I thus had high hopes for this book I picked up for 50c at a second-hand store.
Boy, did it reinforce my initial stereotype about financial books for “women” though.
Throughout the book, lipsticked kiss-marks replace bullet points.
Chapter 3, “Who are you attracted to?” compares investment options to “types” of men. It sets about setting you up with an investment on the basis of what type of romantic partner you are most attracted to.
Chapter 4 compares markets to fashion accessories.
Perhaps most entertainingly, Chapter 7 provides – get this – a financial horoscope.
(Free tip: If you believe in horoscopes, I suggest you reconsider whether you have the right personality traits to invest…)

Are women that different to men?

Flirting with Finance contains statements such as

“Women are different to men: Women have different attitudes, beliefs, and worries about money”.

This may be true, but ‘women’ is not a homogeneous category of people. One woman is different to the next. A man and a woman from a lower socioeconomic background, for example, are far more likely to have money attitudes, beliefs and worries in common than two women, one of whom is on the poverty line and the other of whom is a multi-millionaire. It also claims

“Women are physically different to men. We live longer (so we need even more money for retirement) and are more likely to have interrupted work patterns because of child-rearing or carding responsibilities”.

This is also true on average, but the second factor listed here is not physical at all – it is social. Women’s bodies do not make them any more likely to have an interrupted work pattern – societal attitudes regarding, firstly, pressure to reproduce, and secondly, childrearing responsibilities are. And a stay-at-home dad is likely to have more in common with a stay-at-home mum in this regard than with a man who is in business. It’s their role rather than their physical sex that determines their financial state.
If statements like this, or the assumption that all women are men-and-handbag crazy irritate you, steer clear. Seen as a bit of fun though, for 50c, this book was lighthearted and provided much of the same information that $0 to Rich did. If you enjoy ‘women’s magazines’ this may be a great way to ease into investing, so long as you view it as tongue-in-cheek. Despite it’s ‘girliness’,  much of the content is truly useful.
There is a free mailing list at the website http://flirtingwithfinance.com.au/

Don’t judge a book by its cover

To me, this comparison just demonstrates the truth of the old adage, don’t judge a book by its cover. Flirting with Finance indeed has contents to match its cover. $0 to Rich is a great book for everyone, despite having a cover which implies it is only relevant to females. (And at that, to a specific sub-group of people who identify as women and like Barbie pink, shopping, fashion, etc.)
With a different cover, I could see $0 to Rich perhaps gaining a much more diverse audience. But I guess that finance books for women is a profitable niche which might mean the book has gained a larger readership that it would have with a more generic cover. After all, marketing is all about segmenting the market these days.
It’s important to remember that authors rarely get to chose their covers. As the author of $0 to Rich, Tracy Edwards, commented when I published an earlier version of this post (on a now defunct site):

Glad to hear you liked it sans the bright pink cover (publisher’s idea, words however ARE mine ;))

Likewise, we shouldn’t judge people by their ‘covers’ either. Just because someone looks very feminine does not mean they, as the stereotype goes, know little about investing. Nor does someone who looks very manly necessarily know anything about finances. Just because someone dresses shabbily and doesn’t drive does not necessarily mean they are poor. Nor does someone who has a fancy car and suit necessarily have a lot of money. (In fact, as The Millionaire Next Door reveals, the less snazzily dressed person is perhaps more likely to be wealthy in reality). 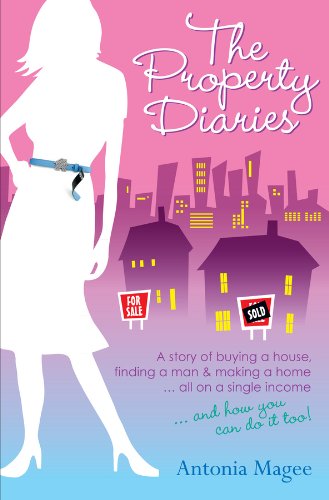 A twist on the theme of finance books for females is Antonia Magee’s The Property Diaries. A fictional story written in a chick-lit genre, the book nonetheless provides great advice about saving a deposit, applying for bank loans, and researching properties. (All within an Australian context – like the other books in this list). Rather than assuming that women are somehow inherently different in their capacities, this book is simply using a genre usually enjoyed by females (although of course, not all females) to explain investing concepts.

And I think it’s a much needed corrective to the balance. Firstly, male characters are far more likely than female characters to be depicted as investors in popular culture. Secondly, chick-lit books normally perpetuate (reinforce, and celebrate) stereotypes of women being irresponsible shopaholics. So The Property Diaries is a breath of fresh air in that sense.

Oddly enough, the first book on finance I read was by a female author, but not what I would consider a book ‘for women’. Anita Bell’s Your Money really ignited a fire in me to become more interested and proactive in this area. Looking back, I now find Your Money a little basic, but for this reason, it is the perfect introduction to finance – and as the subtitle says, it is for anyone starting out or starting over. It is useful at any stage of life, and for that reason, you’ll keep coming back to it. The best thing about this book is the concrete goals Bell outlines. An excellent benchmark keeper. Bell’s website is not the prettiest in the world, but has more than twice the substance of the two listed above put together. You’ll find free tips and downloads at http://www.anitabell.com

In some respects, I find the attempts to make women more comfortable with investing admirable. But lipsticked bullet points aren’t going to help me feel like a confident investor.
The reason there are so many books on finance marketed at women and hardly any at men is because the default target audience of any given book on investing is male.
In sum, “women” in finance book terms does not mean all women. It refers to a very specific category of females – those who love shoes and handbags, intend to get married, and certainly intend to have babies. And there appears to be cultural and ethnicity and class based assumptions too.

Find a book that suits you

If you are a woman, don’t simply rely on ‘women’s’ books. Look for resources that suit your level of investing experience and your goals.
If you aren’t a woman, don’t discount books that are marketed as women’s books. Look beyond the cover – many have great content, and really should be marketed as books for beginners rather than for women.
Likewise, there are many great finance books out there that are marketed specifically to particular minorities, such as African American targeted books in the US. Again, many of these have excellent advice that almost anyone can benefit from.
There’s Talking Dollars and Making Sense: A Wealth-Building Guide for African Americans.
Winning the Money Game, which examines the money ‘fouls’ of pro-athletes, also came up in my search, with its bling-inspired cover. Aron Smith’s In the Black. Girl, Get Your Credit Straight, a ‘sister’s guide’. And many others.
Or you could try Gay Finances in a Straight World. The Best Guide Ever To Getting Out of Debt for Lesbians.
Or ¿Se Habla Dinero? Or The Latino Journey to Financial Greatness.

What is an investor anyway?

Ultimately, I believe books aimed at women and minorities exist for two reasons:
In the next post, we’ll take a look at what the word ‘investor’ means. But for now, remember: don’t judge a book (or a person) by its cover!
What are your favourite investing books? Let me know in the comments!

Copy and paste the below to your favourite social media

This site uses Akismet to reduce spam. Learn how your comment data is processed.